Top 4 most livable cities in Vietnam

If you plan to live in Vietnam, which city to choose and where it is most convenient to build a tourism business and enjoy the gentle touch of the sea, the mountains and their richesrt gifts? Let’s try to visit several such locations.

Da Nang has long been known for its own brands and identities in many fields. There are many opinions that the coastal city of Da Nang is the most livable place in Vietnam due to its clean environment, low pollution, diverse and rich service models, plus living standards as well as infrastructure. stability. There are few tourist cities in the country that tourists visit can comfortably stroll on the sidewalk or beach without being surrounded by teams of “storks” or pretending to be beggars.

In 2011, Da Nang was affirmed its brand when winning the award “environmentally sustainable city” awarded by ASEAN. This is a proud title of the people of Da Nang that is not available everywhere.

Moreover, nature has given special favors to the city on the banks of the Han River with many famous scenic spots. When it comes to Da Nang, many people will not be surprised with famous tourist destinations.

Visitors will fully experience the feeling from going up to the forest to going down to the sea when visiting Son Tra peninsula – about 10km from the center of Da Nang city or visiting Ba Na mountain with a rich ecological area, tourist attractions. The famous Ba Na Hills is nearly 1500m from sea level or visit ancient craft villages such as Non Nuoc stone handicraft village, Cam Ne mat village, Tuy Loan ancient village…

Da Lat is known for the highland city of thousands of flowers. When visiting this place, visitors will feel unforgettable impressions from the cool climate to the beautiful landscapes.

Located on Lam Vien plateau, Dalat city has long become an attractive tourist paradise for both domestic and foreign tourists. This place is like a giant air conditioner that runs all year round with extremely mild temperatures. The average temperature in the year of Da Lat only fluctuates around 20 degrees Celsius, which is very suitable as a resort. 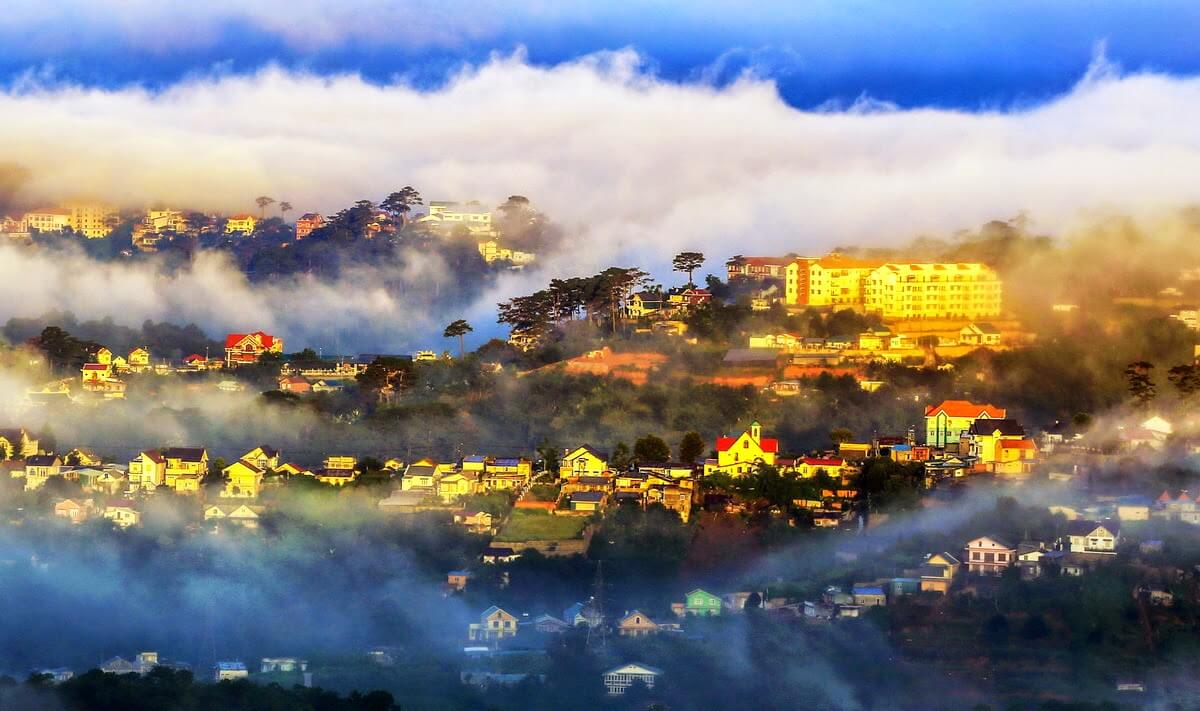 With poetic natural scenery, Da Lat is also known by many affectionate names such as “city of love”, “city of fog” or “city of pine forest”. Not only that, but Da Lat is chosen by many film crews to film, and couples often choose this place to record wedding photos for a lifetime.

Da Lat city captivates visitors with its rich vegetation, from the green pine forests, the yellow color of chrysanthemum flowers, the red color of the velvet rose gardens and countless flowers blooming. All blend perfectly to turn this place into a carpet of colorful flowers, making you feel lost in the magical natural world.

Besides the beauties bestowed by nature, Da Lat is also famous for its unique works with bold French architecture. Until now, Da Lat still maintains and preserves hundreds of ancient villas, which many tourists refer to as “miniature Paris” of the Central Highlands.

3. Nha Trang city is in the top of the most livable city in Vietnam

Nha Trang is the cradle of a major tourist destination in the country with many famous landmarks and special offers of nature. Located in the center of Khanh Hoa province,  Nha Trang is known as “the pearl of the far east” when it owns a series of beautiful beaches, wide roads and villas hidden in the woods.

Nha Trang beach stretches with white sand beach mixed with the blue color of the sky and the golden sunshine. Nha Trang is also attractive with a warm sea climate, full of sunshine and wind all year round.

Not only splendid in scenery, Nha Trang is also attractive by its warm climate and fresh sea breeze

Since June 2003, Nha Trang Bay has been among the most beautiful bays in the world. The bay has an area of ​​over 500 square kilometers including 19 large and small islands. This is a rare natural model that not everywhere can be found when fully gathering elements such as mountains, islands, lagoons and villages, fields…

Nha Trang city has many attractive tourist attractions that visitors can hardly ignore such as Vinpearl tourist paradise, Hon Chong rock complex and Hon Mun island… In addition, this place is also a dynamic coastal city. Full of vitality always appears in the eyes of tourists with many good impressions even once arriving.

Located in the Southeast region, Vung Tau city is a major economic, political and cultural center. Located on the peninsula of the same name, Vung Tau is about 125km southeast of Ho Chi Minh City, surrounded by 42km of coastline.

It has primeval forests, rivers, lakes and oceans, so the climate is always mild and is an ideal tourist destination of the southern region.

Vung Tau is a dynamic city, the economy is making great progress .

With a long coastline, Vung Tau has the advantage of owning many beautiful beaches that generate tourism revenue for the city. When coming here, visitors can visit Thich Ca Phat pagoda, Linh Son ancient temple, statue of Lord Kito, Bach Dinh or lighthouses on Small mountain and comfortably swim in Front and Back Beach.